I just happened to come across this video, which is apparently a video made by students of University of Berkeley as a part of their Campus MovieFest.

The movie is a light-hearted take on the custom of arranged marriages in India. Although widely practiced, the young generation is uncomfortable with the concept and feel compelled to show that it was love that brought them together.

I wouldn’t have honestly minded this, and I did find some parts of the video funny in a cheesy way. But it ends with this ‘message’:

Most Marriages in India are arranged…  amazingly enough this bonding lasts forever!

This really made me angry. There is nothing romantic about arranged marriages. 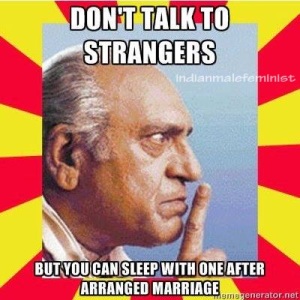 The main part that disturbs me is the concept of spending a lifetime together with a partner you barely know. If it has worked out well for some people, I am happy for them, but I just don’t see it how we are supposed to marry a random stranger you barely know, whom you would have to decide if he or she is a good enough match for you looking at the photograph? Oh, and how are these photographs chosen? Either through online marriage services, or some agents who would do the same offline. And potential ‘grooms’ and ‘brides’ are handpicked by families based on factors like religion, caste, class and even color. Yep, because that is what is very important for the stable marriage, being of the right class, caste or religion. And this is what you are romanticizing, instead of criticizing.

And what makes it all the worse, people who break this ‘tradition‘ of arranged marriage would face serious pressures from many families. Many just don’t bother resisting, but those who do, are disowned from their families. And many who resist are disowned by their families, which has happened in my family itself (although they later made amends, but in many cases they don’t). And that is me ignoring the common problem of forced marriages, which deserves a whole separate post – and this outrages me even more as one my friends now is living under the fear of getting married by force herself.

And as for the, the ‘bonding‘ lasting forever is mostly because there is still really bad stigma associated with divorce, and families would still ask them to ‘compromise‘, even when it comes to domestic abuse – because as  ‘well mannered woman’, you have to make compromises. That is how it rolls. Because it is all the inevitable part of a family life, apparently. This is why I hate it when people bring up divorce rates in the ‘west‘ and compare it to that of India to show how ‘stable‘ our relationships are.

Now remember, I am not talking about those who have a good healthy, relationship that happened to be a result of arranged married, but rather the process itself, as it is widely practiced in India. It’s an utterly despicable and hardly talked about practice in my view – and the last thing you need is a propaganda telling us ‘young generation’ who are ‘uncomfortable with the concept’ how great this absurd practice is.